In computer security the term access control is mainly used to refer to the process of controlling the access of a subject or initiator (Process) or generally perform some sort of operation on an object or target (Data).

The Linux Security Modules (LSM) project has developed a lightweight, general purpose, access control framework for the mainstream Linux kernel that enables many different access control models to be implemented as loadable kernel modules. A number of existing enhanced access control implementations, including Linux capabilities, Security-Enhanced Linux (SELinux), and Domain and Type Enforcement (DTE), have already been adapted to use the LSM framework.

By checking the kernel source code i found that there are two systems that have already adopted to use the LSM framework, Tomoyo and Smack.

Agenda
What is LSM Framework?

Linux Security Modules (LSM) is a framework that allows the Linux kernel to support a variety of computer security models while avoiding favoritism toward any single security implementation. The framework is licensed under the terms of the GNU General Public License and is standard part of the Linux kernel since Linux 2.6. Apparmor, SELinux, Smack and TOMOYO Linux are the currently accepted modules in the official kernel. 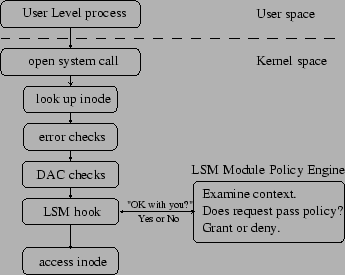 LSM allows modules to mediate access to kernel objects by placing hooks in the kernel code just ahead of the access, as shown in Figure 1. Just before the kernel would have accessed an internal object, a hook makes a call to a function that the LSM module must provide. The module can either let the access occur, or deny access, forcing an error code return.

Many security models require binding security attributes to kernel objects. To facilitate this, LSM provides for opaque security fields that are attached to various internal kernel objects. However, the module is completely responsible for managing these fields, including allocation, de-allocation, and concurrency control.

The LSM kernel patch modifies the kernel in five primary ways. First, it adds opaque security fields to certain kernel data structures. Second, the patch inserts calls to security hook functions at various points within the kernel code. Third, the patch adds a generic security system call. Fourth, the patch provides functions to allow kernel modules to register and unregister themselves as security modules. Finally, the patch moves most of the capabilities logic into an optional security module. 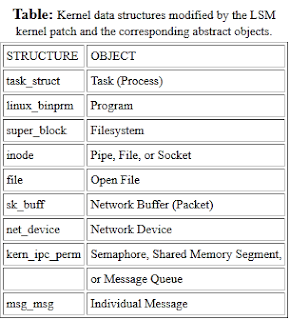 The opaque security fields are void* pointers, which enable security modules to associate security information with kernel objects. Table 1 shows the kernel data structures that are modified by the LSM kernel patch and the corresponding abstract object. 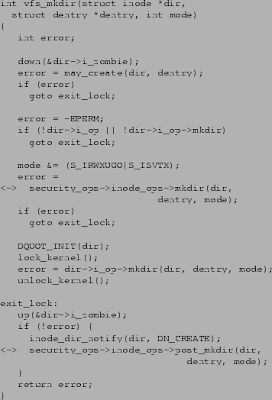 Figure 2 shows the vfs_mkdir kernel function after the LSM kernel patch has been applied. This kernel function is used to create new directories. Two calls to security hook functions have been inserted into this function. The first hook call, security_ops->inode_ops->mkdir, can be used to control the ability to create new directories. If the hook returns an error status, then the new directory will not be created and the error status will be propagated to the caller. The second hook call, security_ops->inode_ops->post_mkdir, can be used to set the security field for the new directory's inode structure. This hook can only update the security module's state; it cannot affect the return status.

The LSM framework is initialized during the kernel's boot sequence with a set of dummy hook functions that enforce traditional UNIX superuser semantics. When a security module is loaded, it must register itself with the LSM framework by calling the register_security function. This function sets the global security_ops table to refer to the module's hook function pointers, causing the kernel to call into the security module for access control decisions. The register_security function will not overwrite a previously loaded module. Once a security module is loaded, it becomes a policy decision whether it will allow itself to be unloaded.

Many security modules, including Linux capabilities, DTE, SELinux, and SubDomain require the ability to perform changes in privilege when a new program is executed. Consequently, LSM provides a set of program-loading hooks that are called at critical points during the processing of an execve operation. The security field of the linux_binprm structure permits modules to maintain security information during program loading. One hook is provided to permit security modules to initialize this security information and to perform access control prior to loading the program, and a second hook is provided to permit modules to update the task security information after the new program has been successfully loaded. These hooks can also be used to control inheritance of state across program executions, for example, revalidating open file descriptors.

For file operations, three sets of hooks were defined: filesystem hooks, inode hooks, and file hooks. LSM adds a security field to each of the associated kernel data structures: super_block, inode, and file. The filesystem hooks enable security modules to control operations such as mounting and statfs. LSM leverages the existing permission function by inserting an inode hook into it, but LSM also defines a number of other inode hooks to provide finer-grained control over individual inode operations. Some of the file hooks allow security modules to perform additional checking on file operations such as read and write, for example, to revalidate permissions on use to support privilege bracketing or dynamic policy changes. A hook is also provided to allow security modules to control receipt of open file descriptors via socket IPC. Other file hooks provide finer-grained control over operations such as fcntl and ioctl.

Application layer access to networking is mediated using a set of socket hooks. These hooks, which include the interposition of all socket system calls, provide coarse mediation coverage of all socket-based protocols. Since active user sockets have an associated inode structure, a separate security field was not added to the socket structure or to the lower-level sock structure. As the socket hooks allow general mediation of network traffic in relation to processes, LSM significantly expands the kernel's network access control framework. For example, the sock_rcv_skb hook allows an inbound packet to be mediated in terms of its destination application, prior to being queued at the associated userspace socket.

LSM provides two additional sets of hooks: module hooks and a set of top-level system hooks. Module hooks can be used to control the kernel operations that create, initialize, and delete kernel modules. System hooks can be used to control system operations, such as setting the system hostname, accessing I/O ports, and configuring process accounting. The existing Linux kernel provides some control over many of these operations using the capability checks, but those checks only provide coarse-grained distinctions among different operations and do not provide any argument information.